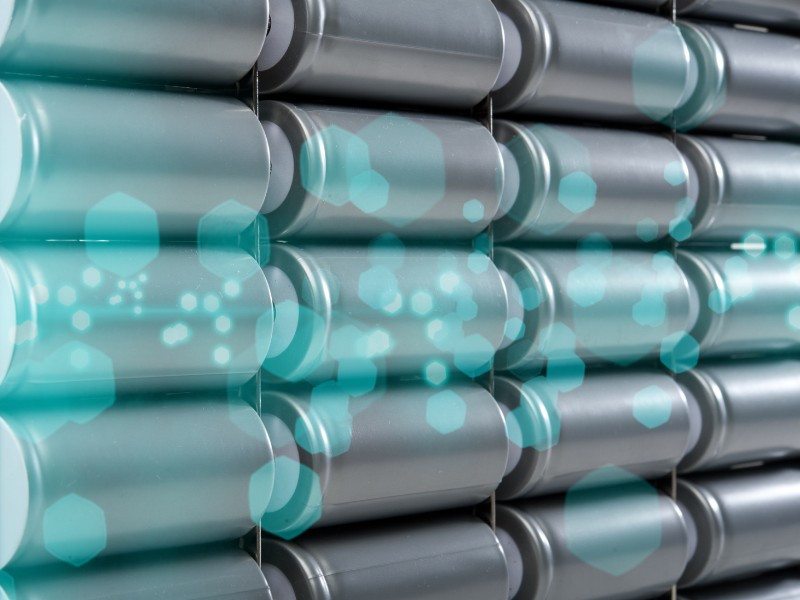 Clean-energy protagonists have long argued that the world needs a better battery, one capable of enticing skeptical consumers into electric cars and running the grid on renewable power.

And yet the battery of the future, at least for the next decade or so, will almost certainly be the battery of the past. Invented by an Exxon Mobil Corp. researcher in the 1970s and commercialized by Sony in 1991, rechargeable lithium-ion (Li-ion) technology has been around for decades – but can it support the rapidly increasing number of EVs manufacturers have planned for the future?

According to Logan Goldie-Scot, head of energy storage research at BloombergNEF, “it’s a very versatile technology, so every time it gets cheaper more demand segments open up’’. Li-ion battery pack prices, which averaged $1,160 per kilowatt hour in 2010, reached $176 per kWh last year and could drop below $100 by 2024. The continuing drop in prices combined with improved performance will likely open up unexplored new markets, placing an increased strain on supply chains.

Key to continued growth is sufficient and cost effective supplies of the raw materials required to produce Li-ion battery packs – in particular stocks of lithium.

Is Lithium the new oil?

To keep pace with the expected growth in the EV market, auto and battery makers are proactively securing sufficient long-term supplies of lithium by entering into extended contracts with lithium miners. It is estimated that only 10 percent of total LCE (lithium carbonate equivalent) pricing is negotiated at spot prices, with long term contracts heavily favored in the industry. 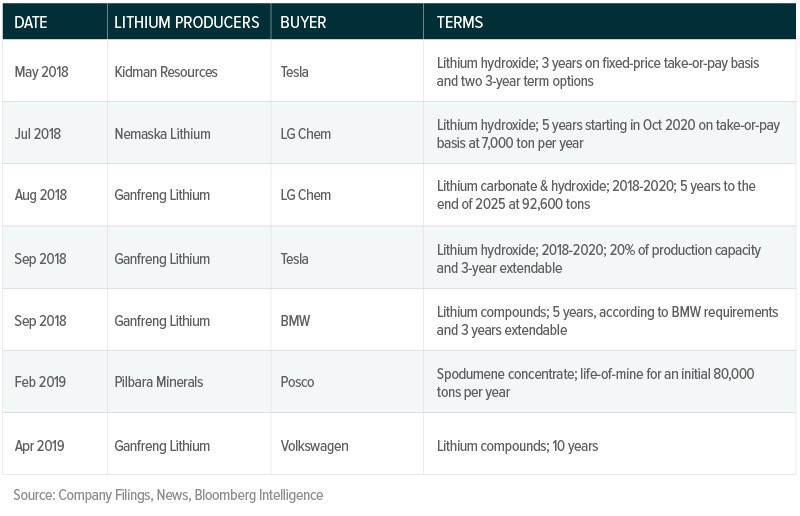 These long-term contracts are often preferable for both OEMs and lithium producers who want to lock-in prices, often resulting in more stable cash flows. The contracts also help lithium miners secure the financing required to ramp up their lithium output.

In order to meet future demand, lithium suppliers are rapidly trying to scale production. In 2018, lithium miners around the world announced capacity increases that could potentially bring production to 635,000 metric tons of LCE. All the same, in Q4-2018 and Q1-2019, more than 200,000 metric tons of LCE of new investments have been hit by delays or other challenges.

When analyzing this growth in supply it is important that the quality of the lithium output is taken into account. Much of the promised capacity increase is regarded as non-battery grade, also known as technical grade.

However, even with the supply of raw materials secured EV manufacturers remain extremely exposed to capacity constraints on battery cell production.

Will installed battery manufacturing capacity keep up with demand?

BloombergNEF estimates that China controls about two-thirds of the global lithium cell production capacity, forecasting this could grow to about 73 percent by 2021. The US controls only about 13 percent, with no growth expected.

This limited manufacturing capacity has left some automakers planning big investments in electric cars, at the mercy of battery suppliers leading to delays in the launch of new products and lower production rates of some existing models.

In a May 2019 conference call announcing the company's annual earnings, Tesla's main battery supplier, Panasonic, cautioned that the two companies won't have enough battery-building capacity to support production of the Model Y. Panasonic CEO Kazuhiro Tsuga told reporters that "batteries will run out if Tesla starts to sell the Model Y and expands its business next year.”

Still, a 2019 report by Benchmark Minerals shows that, in an effort to remedy the situation, battery makers are working quickly to meet the growing demand for Li-ion battery cells.

Back in Q1-2015 there were just three megafactories in the world, but driven by rising production of electric cars, worldwide manufacturing capacity for Li-ion batteries has almost tripled in the last five years alone, with capacity now standing at 302.2 gigawatt-hours, and plants with another 603.8 GWh planned to go into production within the next five years. By 2028, the industry is expected to grow to over 70 factories, giving a total of 1.7 TWh of Li-ion capacity.

And supply predictions continue to rise rapidly. According to Benchmark Minerals' Battery Factory Data, in February 2019 battery suppliers ramped up their forecast supply from 922 gigawatt-hours in 2023 to 965, an increase of four percent in February alone. Extrapolated to an annualized forecast, that would increase battery supplies available in that year by 50 percent.

This rapid rise in production capacity is not only being driven by investment in facilities – as the technology matures, new, more efficient processes are driving down costs and cycle-times and increasing throughput.

While most mainstream articles covering Tesla’s acquisition of Maxwell focus on the value of the deal in terms of improving battery tech and energy density, Maxwell’s solvent-free electrode coating technology could also drive down battery cell costs and allow for higher battery production rates and decreased equipment costs. 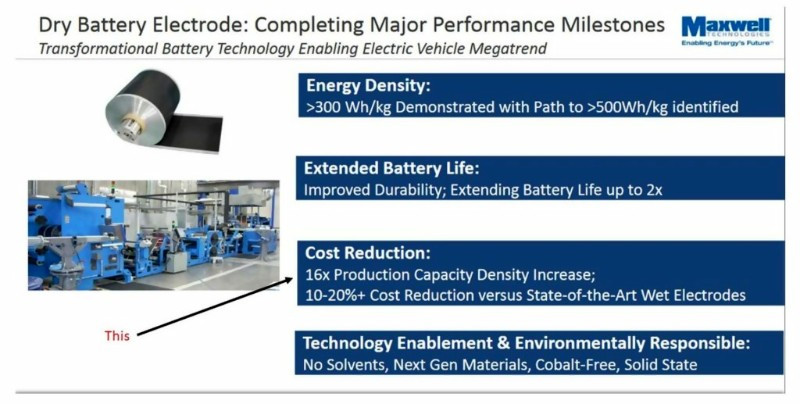 In manufacturing Li-ion cells, the throughput of the traditional solvent-drying process is highly reliant on the capacity of the solvent-evaporating ovens.

To produce the electrodes a thin layer of slurry is applied onto copper or aluminum sheets. Then, in a continuous process, the coated electrode sheets go through a long oven that evaporates the solvent, which must also be recovered for reuse.

To increase manufacturing throughput requires more solvent-evaporating ovens that cost money and occupy large areas of the production floor. The area just for the electrode preparation, coating, evaporation and vapor recovery is typically almost one third of the total plant area.

Furthermore Tesla’s cells are high energy density. This implies a thicker electrode coating. The thicker the coating, the more time it takes to flash off the solvent.

According to Maxwell, its dry electrode increases production capacity over the traditional process by 16 times.

As the global auto industry undergoes the transformation from ICEs to EVs, Li-ion batteries and the materials that are used to produce them would appear to be in-step with projected requirements. Yet as the industry adapts to accommodate this great transformation, both opportunities and risks remain, as consumer preferences, regulations, and supply chains adjust to the new paradigm.

Therefore the actions taken by manufacturers in the next three- to five-years will play a crucial role in the rollout of electric vehicles and stationary storage batteries over the next decade.