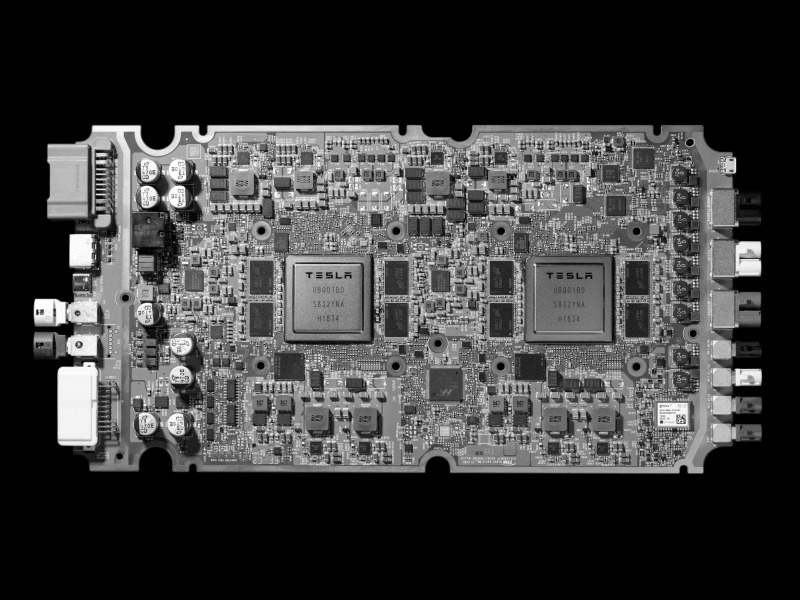 As ever, the annual publication aims to reveal on the current state of the semiconductor industry, and the challenges being faced by those racing to meet increased demand for automotive semiconductors used in the next generation of vehicles.

As part of the process, we survey our members and our industry experts to gather opinions and insights on the state of the industry, and these results are used to produce the report. This case study is an excerpt from our 2019 Semiconductors in the Autonomous Age report, which you can download now.

Key among the announcements was the arrival of its Full Self-driving Chip (FSC). Designed in house and made for the firm by Samsung, CEO Elon Musk proclaimed that the chip is “the best in the world.”

The Tesla FSC is now installed in every new Tesla and will be retrofitted to cars already on the market where owners have paid for the firm’s Full Self-driving package. Designed for the advancement of Tesla’s self-driving goals, the FSC is actually two chips specifically created to prioritize the AI processing and decision making required to make full autonomy safe and reliable. The chip costs 20 percent less than the NVIDIA version, and – and this is Tesla’s killer feature – it’s fitted to every Tesla, something costs prohibit other carmakers from doing.

But while the Tesla chip is doubtless an impressive achievement, NVIDIA issued a check on Musk’s claims when comparing his company’s chip with the outgoing silicon. NVIDIA is pretty tactful in defense of its own products, perhaps in deference to Tesla’s position as the mouthpiece for the automotive industry when it comes to shouting the benefits – and the progress made – with full self-driving cars.

For example, Musk claimed that the new Tesla two-chip system operated a 144 trillion operations per second (TOPS), while the NVIDIA chip only performs 21 TOPS. However, the comparison was made with the latter’s Xavier ADAS SoC system that ran Tesla’s Autopilot, rather than NVIDIA’s full self-driving targeted Drive AGX Pegasus computer.

The Xavier chip operates at 30 TOPS, not 21, and the Pegasus platform is essentially two pairs of Xavier chips and GPUs, giving a total capacity of 320 TOPS. The NVIDIA chip will be superseded by an even more powerful processor, dubbed Orin, in the future.

NVIDIA says it agrees with Tesla that selfdriving cars “require massive amounts of computing performance. Indeed Tesla sees this approach as so important to the industry’s future that it’s building its future around it… Every other automaker will need to deliver this level of performance.”.

And, while Tesla hasn’t mentioned plans to share its tech with anyone else, NVIDIA’s statement on the issue raises the point that its system is an open platform, inviting other automakers to jump on its tech in order to stay in the self-driving car race.