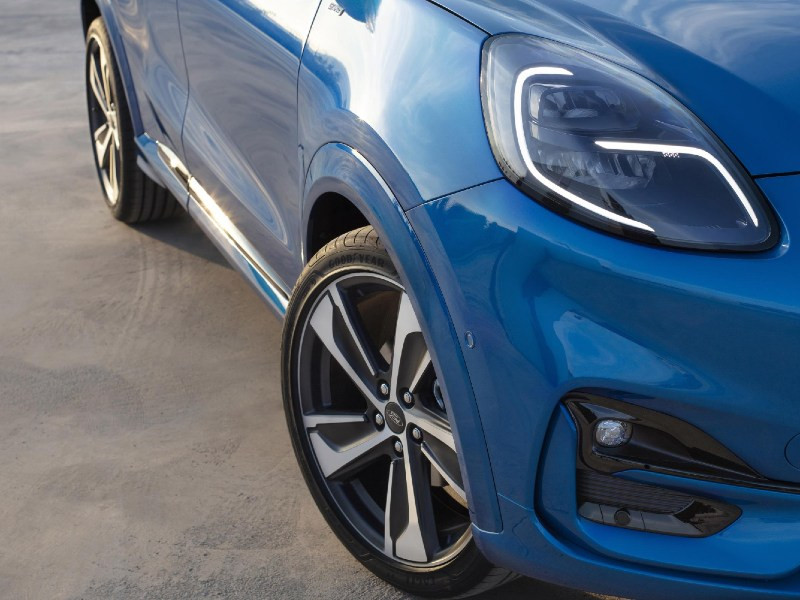 The technology is capable of delivering about 70 percent of the performance of a conventional ICE-electric hybrid for about 30 percent of the cost. However, that hasn’t stopped the car manufacturers continuing to look for ways to drive costs even lower in the highly price-sensitive Mild Hybrid EV (MHEV) segment.

The importance of reducing costs can be appreciated when the potential growth of the market is taken into consideration. Driven by plummeting diesel-powered passenger-vehicle sales and escalating fleet CO2 targets, manufacturers are increasingly turning to this affordable technology for the mass market, such as on the new Ford Puma crossover (below). 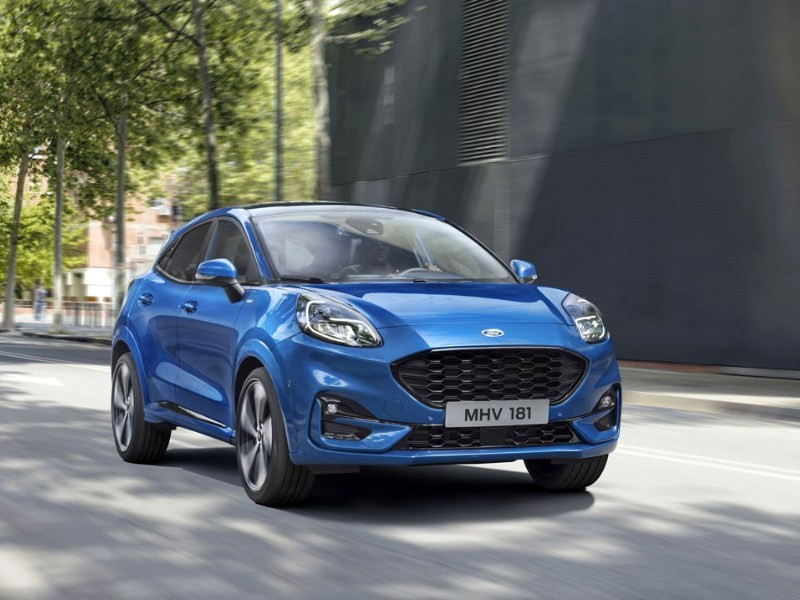 According to LMC Automotive, the market share of 48V applications in Europe will grow from a tiny 0.4 percent in 2018, to 33 percent by 2030. Asia will see the sales share of vehicles equipped with 48V systems rise from absolute zero today to 13.7 percent in 2030, while the US is projected to go from 0.2 to 8.2 percent in the same period.

French supplier Valeo, a major player in 48V systems, is equally bullish in its outlook, forecasting 48V market penetration could rise to 33 percent globally by 2030, with applications ranging from small and family cars to shuttles and delivery vans.

Adding weight to the argument favoring hybrid electrification, Emissions Analytics, a leading independent specialist for the scientific measurement of real-world emissions, suggests that mass adoption of hybrid, and in particular mild hybrid EVs, rather than the low-volume take-up of full BEVs, is the most effective solution to cutting CO2.

According to the company’s analysis, taking into account all electrification strategies, full BEVs currently offer the least effective CO2 reduction per kWh of battery size – 21 times worse than mild hybrids and 14 times worse than full hybrids.
The distance-specific CO2 reduction per unit of battery capacity, in g/km/kWh, indicates that mild hybrids are the most efficient way to reduce CO2, given limited global battery capacity. With a reduction of 73.9g/km/kWh, 48V MHEV technology is a clear winner, with full hybrids coming in second at 50.5g/km/kWh. Due to their disproportionately large batteries, BEVs performed the worst, with a mere 3.5g/km/kWh reduction.

While this viewpoint may be debated, the importance of MHEVs in meeting emissions and power requirements over the next few years cannot be overstated. As a result, in order to win over consumers already burdened by rising car prices, manufacturers are focused on optimizing or even reducing system costs.

As with any other form of electrification using a battery for energy storage, the 48V lithium-ion (li-ion) battery is the first component to come under scrutiny.

The 48V power network will automatically benefit from tumbling li-ion battery costs, due in part to the economies of scale that the 48V technology contributes to. Li-ion battery pack costs have fallen more than 80 percent since 2010, when the first EVs were introduced with battery packs costing roughly $1,000/kWh. That figure fell to about $190/kWh in 2017 according to the Union of Concerned Scientists. The US Department of Energy wants to see that cost drop to $125/kWh by 2020.

While economies of scale will eventually drive battery costs down, manufacturers are turning their cost-cutting attention to optimizing the li-ion battery specifically for its application in the 48V MHEV.

Mild hybrids need to recover energy efficiently and at a high rate during deceleration. However, packaging and cost factors encourage the use of more compact batteries with reduced storage capacity. This means that OEMs usually opt for a small battery pack that is capable of high-power charge and discharge cycles.

Under these conditions, inadequate battery cooling can have a significant impact on charge and discharge performance and battery life. The problem lies with the marginal difference between battery and ambient temperatures, which some manufacturers solve by replacing passive-cooling with active air- or liquid-cooling, which can be linked to other vehicle temperature control circuits, such as the HVAC or engine cooling. This in itself raises challenges such as keeping the coolant separate from the cells. 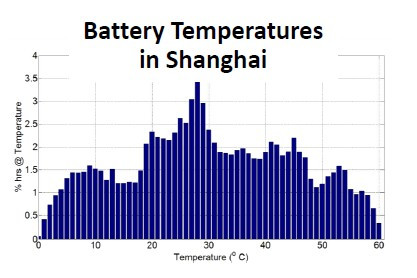 Furthermore, given its greater technical complexity, the choice of an active cooling system, whether with air or liquid, usually results in higher costs for the battery and subsequently the vehicle. By contrast, well executed passive cooling can reduce overall system costs, without impairing battery life or performance.

Air cooling could be the optimal choice

In order to prevent any damage, conventional cells automatically reduce their output as soon as temperatures reach 55 to 60 degrees Celsius. However, the cells in Bosch’s battery have been developed to deliver full output at temperatures up to 75 degrees, without any reduction in service life.

Instead of active cooling the battery uses passive cooling that exploits the thermal conductivity of heat sinks in the immediate vicinity of wherever the battery is installed, to regulate the temperature.

Integral to the overall design of the Bosch battery is its plastic housing that protects against damage from the outside while also withstanding the continual expansion and contraction of the cells during charging and discharging throughout the battery’s service life.

This choice of housing brings other advantages, too. Plastic not only cuts costs, it can also be molded into complex forms that aid packaging and facilitate the integration of added functionality.

The compact 48V battery, 309 millimeters in length, 90 millimeters in height, and 175 millimeters wide, delivers a 11kW/13kW discharge/charge at 25 degrees Celsius, at 50 percent state of charge (SoC). What's more, without the complexity of active cooling the Bosch component, weighing less than six kilograms, is between one and two kilograms lighter than an equivalent actively cooled device.

Also looking to reduce engineering costs and optimize packaging, automotive supplier, Hella, has designed the 48V PowerPack that combines a 48V li-ion battery block that includes the battery management and DC/DC converter. This makes it easy to integrate the system into an existing vehicle architecture.

The innovative system, consisting entirely of lithium-ion cells that are switched intelligently depending on the application, combines the conventional separate core components such as 48V battery, 12V battery and DC/DC converter within a single element that can be installed in the space of a conventional lead-acid battery.

While there can be no doubt about the importance of the battery in reducing 48V system costs it is not the only cost driver – the starter generator also has a significant role to play.

Because of their location in the engine compartment, 48V belt-driven starter generator (BSG) e-machines need to be compact and operate efficiently at elevated temperatures, which is why machines with permanent magnets are common in this application.

The magnets used in automotive motors typically aim for high coercivity, or the ability to maintain magnetization, at the high temperatures that are typical in automotive applications.

To achieve these properties, and the desired power density and efficiencies demanded by regeneration and torque-boosting functions, BSGs usually rely on magnets comprising up to 30 percent rare-earth metals, such as neodymium and dysprosium, which are costly and strategically sensitive.

In the US, the Advanced Research Project Agency – Energy (ARPA-e, a part of the US Department of Energy) started its REACT – Rare Earth Alternatives in Critical Technologies – program to develop low-cost, reliable alternatives for rare earths. In the last decade, REACT has helped fund several development efforts for EV motors using non-rare-earth magnets.

Programs such as this, and independent research by several manufacturers, have resulted in a number of cost-cutting processes and materials that replace or reduce the reliance on rare earth metals:

Whilst first generation 48V systems are largely standalone components added to existing powertrains, cost and weight reduction will increasingly demand more integrated solutions. In meeting these demands Infineon and printed circuit board manufacturer Schweizer Electronic AG have developed a new technology for mild hybrid vehicles – Chip embedding of power MOSFETs. The technology, planned for mass production in 2021, increases the performance of 48V systems while reducing their complexity and associated costs.

In chip embedding, the power MOSFETs are not soldered to boards as before, but integrated into them. The thermal advantages associated with this should enable a significantly higher power density. In addition, this technology improves reliability, allowing system developers to increase the performance of a 48V system or make it more cost-efficient.

Continental Powertrain is the first to use this technology, employing it in a 48V starter generator for vehicles of a major European car manufacturer. "Chip embedding allows us to increase performance by 60 percent compared to a conventional system," explains Dietmar Vogt, system technical Project leader at Continental Powertrain. 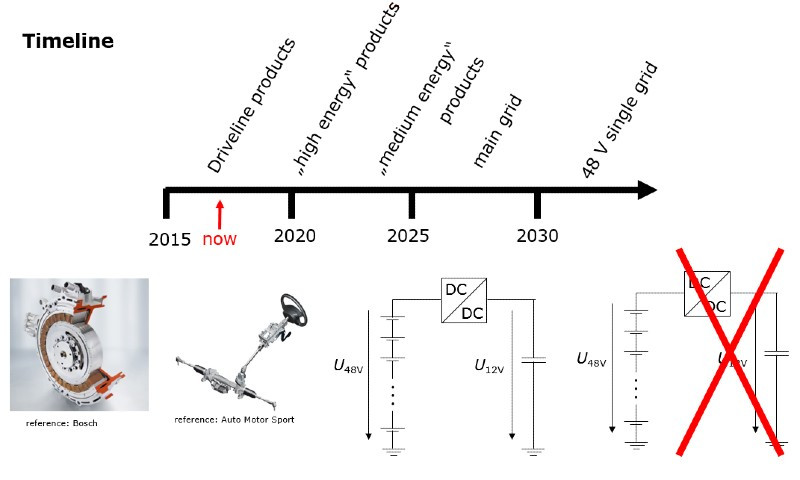 While these are the current cost-cutting opportunities, as 48V technology matures and the system becomes entrenched in the vehicle’s architecture, other opportunities will more than likely present themselves – maybe even the switch to a single 48V grid without the need for a 12V battery. Only time will tell how that plays out.