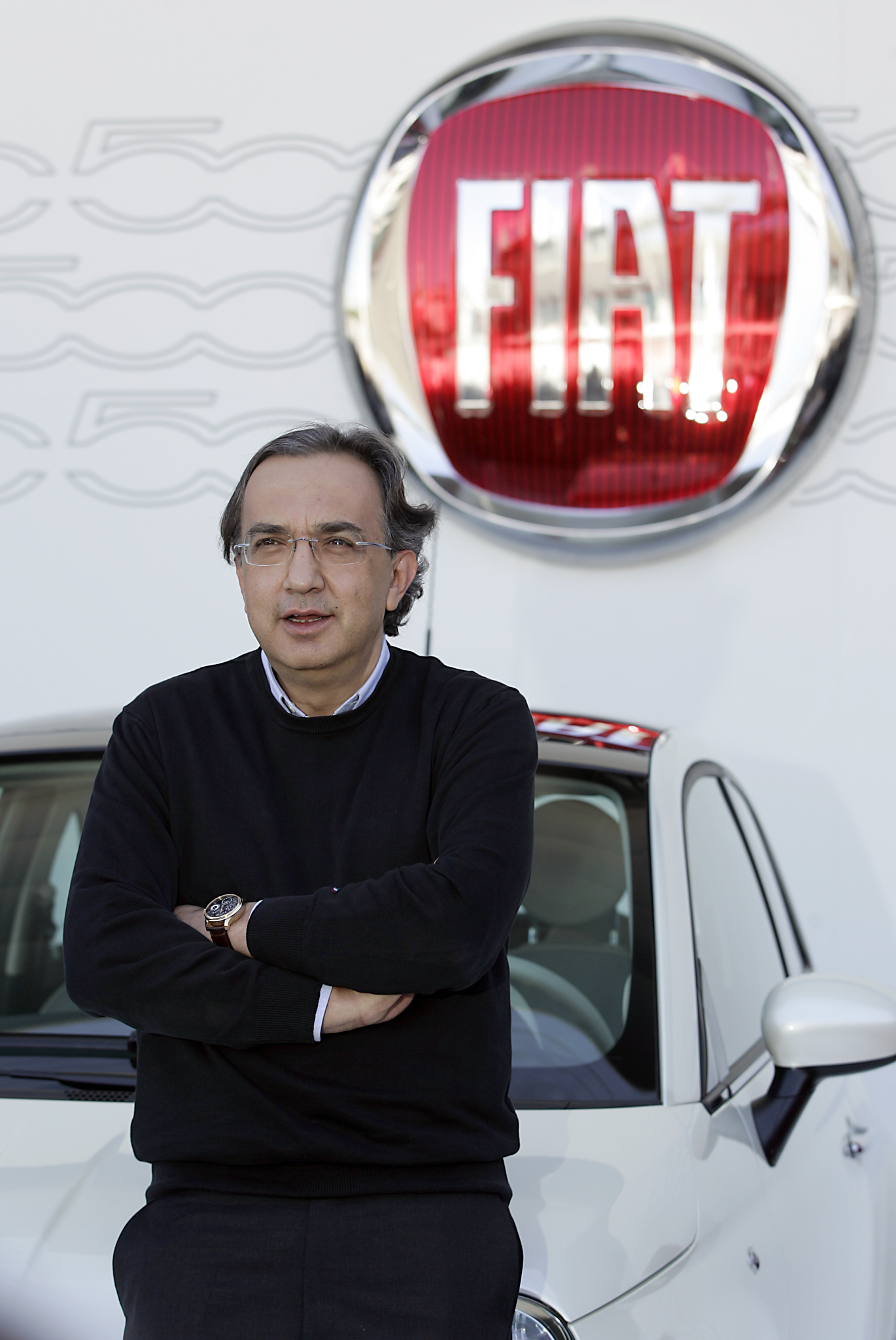 Already rocked by the news that FCA’s legendary CEO, Sergio Marchionne, had been replaced in a special meeting of the board on July 21st, the automotive industry was soon to be confronted by the unthinkable – a future without the larger than life Marchionne.

The Italian Canadian will be a hard act to follow. Elected as CEO of Fiat SpA in June 2004, he took the Italian manufacturer from the brink of bankruptcy to the New York Stock Exchange, where he rang the bell on October 13, 2014, to mark the debut of Fiat Chrysler Automobiles NV, the London company created when Fiat bought the Detroit automaker. 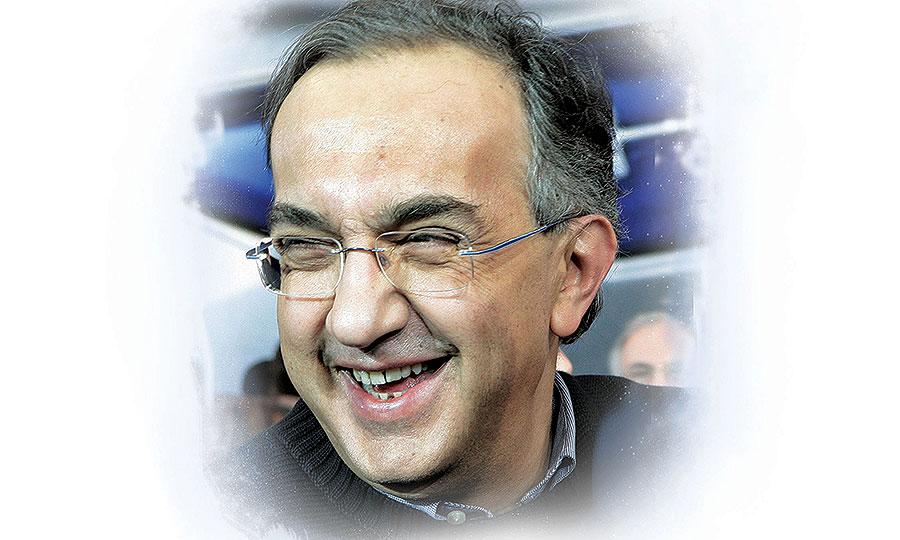 Even before Marchionne’s untimely death it was always clear that moving forward after his planned retirement in 2019 was going to be a tough task for FCA. Just how tough was revealed when shares dropped by as much as 16 percent following new CEO Mike Manly’s cautionary forecast of a lower company profit for the year.

Wall Street's reaction might not have been entirely about the company missing second-quarter earnings expectations or changing its outlook; it also seemed to reflect the uncertainty created by FCA losing one of the most strategic and coveted CEOs in automotive history.

Analysts credit his industry vision and ability to strike deals and take risks for increasing the market value of Fiat tenfold since he took over in 2004. Along the way he created shareholder value for the Fiat-founding Agnelli family with successful spinoffs of the iconic Ferrari sports car company and Fiat's heavy vehicle maker CNH Industrial.

But strangely, while the spinoffs created value for shareholders, his vision for FCA and indeed the industry, was quite the opposite. In his 2015 presentation, titled “Confessions of a Capital Junkie”, Marchionne spelt out in great detail his cure for the industry's value-destroying addiction to capital: Industry-wide cooperation, even going as far as calling for mergers, similar to the one that brought about FCA!

Alas, his goal of another major merger for FCA failed to find any takers.

As costs rise, will the industry heed Marchionne’s advice?

Marchionne was made painfully aware of the excessive costs of running an OEM when he took over the reins of Fiat that had lost more than $7 billion in 2003. By 2005, he had returned the company to a profit by wringing about $2 billion from an alliance with General Motors Co., laying off thousands of workers, introducing new models and slashing the time it took to get a new car to market to just 18 months, from four years.

This early experience in the automotive industry may very well have prompted his famous 2015 presentation, at the close of which he rebuked the auto industry for its wasteful ways; quoting a powerful passage from Lewis Carroll's “Through the Looking-Glass:”

The Red Queen tells a frustrated and exhausted Alice that in her world “it takes all the running you can do to stay in the same place. If you want to get somewhere else, you must run at least twice as fast as that!”

Confronted by the cost burden of developing capital intensive technologies such as electrification and automated driving, as well as the cost of meeting ever tightening emissions regulations FCA’s CEO was painfully aware that the company, and indeed the industry, would be forced to run faster, to maintain value for shareholders.

Focusing on R&D expenditure Marchionne presented the following slide that illustrates the breakdown of development costs, arguing that 45 to 50% of these could be shared across brands, as they resulted in components that were “undiscernible to the customer.” 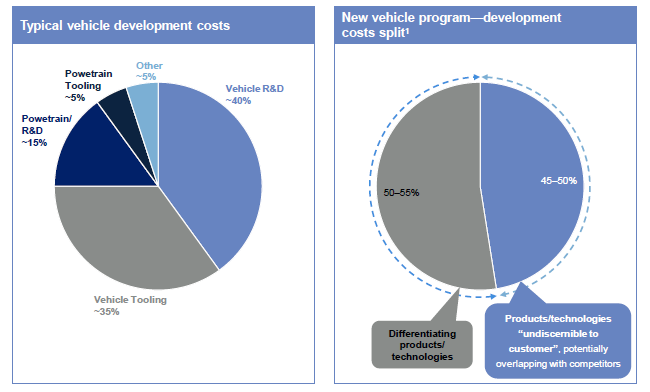 One such capital-sapping trend, electrification has already cost the global automotive industry more than USD 90 billion. Recognizing the importance of electrification Marchionne promised that FCA, often criticized for not investing in its products, would spend at least $10.5 billion to electrify most of its global lineup, and another $52.5 billion to develop products.

It is spending such as this that validates Marchionne's 2015 assessment: It is madness for automakers to each spend heavily developing near identical technologies, when sharing the burden would be more efficient.

And in the case of FCA’s new CEO; without a merger, he risks finding himself in the same predicament as Alice: Running at double speed to avoid standing still.

If there is one region where this is particularly true, it’s the complex Chinese market where several disruptive market forces threaten to derail the company’s continued performance.

Is China a footnote to Marchionne’s five year plan?

In Manley’s first public appearance as FCA’s CEO he painted a not so healthy picture of the company’s performance in the important Chinese market: Slumping sales dragged FCA’s net income down 35 percent year on year for the second quarter, forcing the automaker to cut its revenue and profit expectations for 2018.

The lower shipments from its China joint venture came as “a result of market decreases, particularly in the SUV segments, and increased competition from domestic brands in China,” FCA said.

In tandem with the plummeting sales, FCA has to address China’s hefty duties on imported vehicles if it wants sales to grow.

In 2017, FCA imported 16,545 Jeep vehicles to China, accounting for 8 percent of the company’s local annual sales.

With U.S.-built vehicles now subject to 40 percent duties at the Chinese border, FCA will have to produce more Jeeps in China to offset what looks like an inevitable sales decline for imports.

Another major challenge for FCA’s China operations is the pressing need to improve fuel economy of its product lineup and roll out electrified vehicles to meet local regulations.

To make matters worse, next year, the Chinese government will enact a carbon credit program, which is essentially a production quota system, to prod automakers into ramping up production of electrified vehicles.

But with no such vehicles on offer, in order to comply with Chinese rules on fuel economy and green vehicle production FCA needs to introduce electrified vehicles ahead of the schedule, outlined in the five year plan.

There’s no doubt that the company could accomplish this, but it will require the full commitment from the FCA management team – a team that was incredibly loyal to Marchionne and his vision.

However, keeping the undeniably talented team onboard without Marchionne could be as challenging for Manley as completing the company's five-year plan through 2022.

While turning around Fiat S.p.A. and Chrysler Group to eventually create FCA, Marchionne consistently promoted from within and empowered "the kids," as he called his young stable of executives, to make their own decisions.

They either reaped the rewards or suffered the consequences, which many times led to executives leaving to pursue "other interests." However, it made top lieutenants who stayed, including Manley, extremely loyal.

Global design chief Ralph Gilles described he and Marchionne in 2015 as having "a subterranean bond," while Scott Garberding, then chief purchasing officer and now head of quality, said he was "very personally invested" in working for Marchionne.

But executives' loyalty wasn't necessarily directed at the company as much as it was at Marchionne — a problem that has already started to play out, with Alfredo Altavilla, the head of FCA's Europe, Middle East and Africa regions, quitting after Manley's appointment as CEO. Altavilla had also been a candidate to succeed Marchionne.

So, without Marchionne it remains to be seen whether more departures are on the horizon.

Morningstar Inc. analyst Richard Hilgert, in a note to investors last week, said the loss of Marchionne is a "key man risk," which can be detrimental to business operations, confidence and company image.

Whether Manley can successfully execute the automaker's five-year plan and maintain the house he helped Marchionne build, probably won't be entirely clear until 2022.

But should he seek inspiration he might find it in Marchionne’s office on the fourth floor of Fiat’s Turin headquarters where a black-and-white poster of the word “competition” and a Picasso print bearing the motto, “Every act of creation is first of all an act of destruction,” will hopefully continue to motivate the company to new heights.