Exploring some of the top automotive tech startups emerging from Tel Aviv, Jerusalem and more… 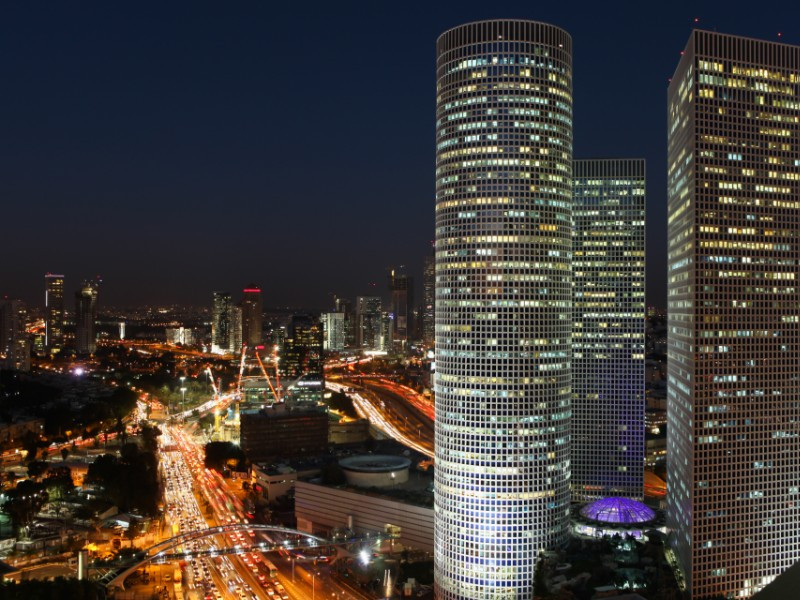 That’s how Intel described its acquisition of Jerusalem-based MobilEye in 2017 for the not-inconsiderable sum of $15.3bn. The eye-watering amount was part of Intel’s grand plan to become number one in the autonomous vehicle systems, data and services market, which it calculated to be worth up to $70bn by 2030.

But while this huge figure is often touted as an example of the increasing importance of Israel as one of today’s global hotspots for tech development, the country has been building the foundations for its current international investment appeal for years.

Intel itself has had a presence in Israel since 1974, so its interest in MobilEye is unsurprising. As of last year, Intel reports that it employs 12,800 people across all of its divisions in five locations in Israel, and the firm exports around $3.6bn worth of hi-tech products, or 7.5 percent, of the country’s total.

Why is Israel so good for startups?

It’s difficult to avoid geopolitics when it comes to Israel, but this article, by Shlomo Magdassi, a professor at Hebrew University of Jerusalem, does a good job of spelling out the unique circumstances that have helped lead to Israel’s current success – essentially boiling down to the fact that Israel’s extremely complicated relationship with its neighbors has been hugely formative.

This includes the necessary fostering of a culture of resilience and self-reliance, and therefore innovation through necessity. Military service being compulsory for many at the age of 18 is also cited as important for building knowledge of tech and its practical applications in its youth population.

Add in the fact that Israel now has one of the highest rates of education in the world, and venture capital money has arrived, and the conditions for startup growth are present and correct, and what we see today.

And for automotive industry startups?

Israel’s tech industry got off to a shaky start with its relationship to the global automotive industry thanks to the 2013 bankruptcy of Better Place, a firm run by Shai Agassi, an entrepreneur who was born in Israel and made his fortune in Silicon Valley.

What started as an innovative idea in 2008 – splitting the battery from an electric car to allow a depleted unit to be simply swapped for a full one in about three minutes – and launched in Israel, ended up burning through approaching $1bn in venture capital funds to sell a little over 1,000 of the 100,000 Renault-Nissan-built EVs it planned to shift.

However, since then, things have picked up significantly – and hence why so much is made of Intel’s high-profile acquisition of MobileEye as an indicator of the innovation being shown in automotive products in Israel.

This chart for example, complied by Israeli tech-focused investment group Viola, shows a sizeable selection of firms working in the automotive space: 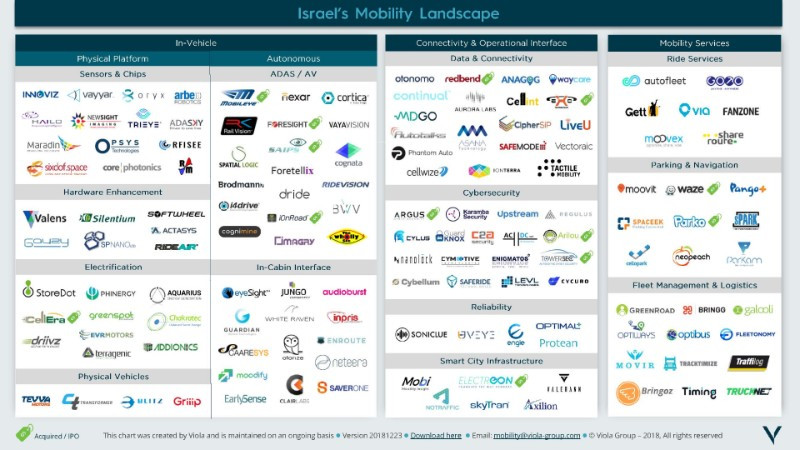 What do Israeli tech firms focus on?

With over 600 startups working on – at least potentially – redefining the automotive industry, there’s plenty for OEMs who have established bases in Israel to get their collective heads around. And that’s before we consider the unknown number of firms which are operating in stealth mode, until their idea is ready to set forth and venture for a funding round or two.

Israel has gained a reputation for global excellence in cybersecurity. And with increasing technical connectivity and sophistication, protecting vehicles from cyber attacks is becoming huge business.

Helping to get the country on the map in this regard is Argus. Founded in 2013 by a team with backgrounds in the Israeli military, the company was bought by Continental AG for $430 million in 2017, and is now part of its Elektrobit automotive cybersecurity subsidiary.

Regulus, founded in 2016, focuses on sensor security, specifically sensor input-based attacks. These include its Pyramid suite of solutions to prevent spoofing the sensor’s receivers, and jamming, which causes the sensor to fail in providing any inputs and renders it blind.

Another firm of note is Karamba Security. The firm claims that it has created 'the self-defending vehicle’ security suite for any connected car. The company won TU-Automotive’s Industry Choice Company of the Year at TU-Automotive Detroit 2019 for its ECUs, which are sealed against attempts to override the ECU factory settings. The award is the third year in a row that the firm has received recognition of the fact that cybersecurity is becoming a bigger issue, and one that cannot be overlooked as cars become ever-more connected.

AdaSky, which recently attracted $20million in funding from South Korean automotive components manufacturer Sungwoo Hitech, has developed a far-reaching infrared camera designed for mass production. The sensor was shown at the 2019 CES show integrated into a smart headlight, improving protection and cleaning capabilities.

Another firm on the radar – pun intended – of lots of companies is the work of Arbe. According to its website, the firm’s 4D imaging radar “provides unprecedented levels of driving assistance, navigation path planning and collision avoidance support.”

Oryx, creator of what it claims is the "world’s first coherent flash automotive LiDAR, based on groundbreaking light-sensing antennas," is another company of note working in the sensing field. The firm received $50 million in Series B funding in 2017.

After a tricky start, Israel’s automotive startups are now some of the hottest properties on the planet, especially thanks to their compatibility with vehicles that are becoming increasingly Connected, Autonomous, Shared and Electric. It’s no surprise to learn of the investment from the OEMs as a result, both in terms of acquisitions and R&D centers on the ground, with more of the latter arriving this year.

However, while the country’s population remains stable, a report by the Shoresh Institution for Socioeconomic Research has discovered that those in its high-tech, medical and academic fields – those essential for the country to continue to grow – are often opting to move, predominantly to the US, in increasing numbers.

The very tech that is making Israel the place to be is also increasing mobility – so can the country maintain its position right at the forefront of automotive tech? We will watch with a keen interest…