Fund Managers Predict the Decline of Oil, But We’ve Heard This Before

World fund managers predict a fall in the value of oil companies. According to a survey published last month in the United Kingdom, climate change risks will force a lower valuation of oil company stock prices within the next five years. But despite many predictions of demise over the last 50 years, global consumption of hydrocarbon energy continues to grow. 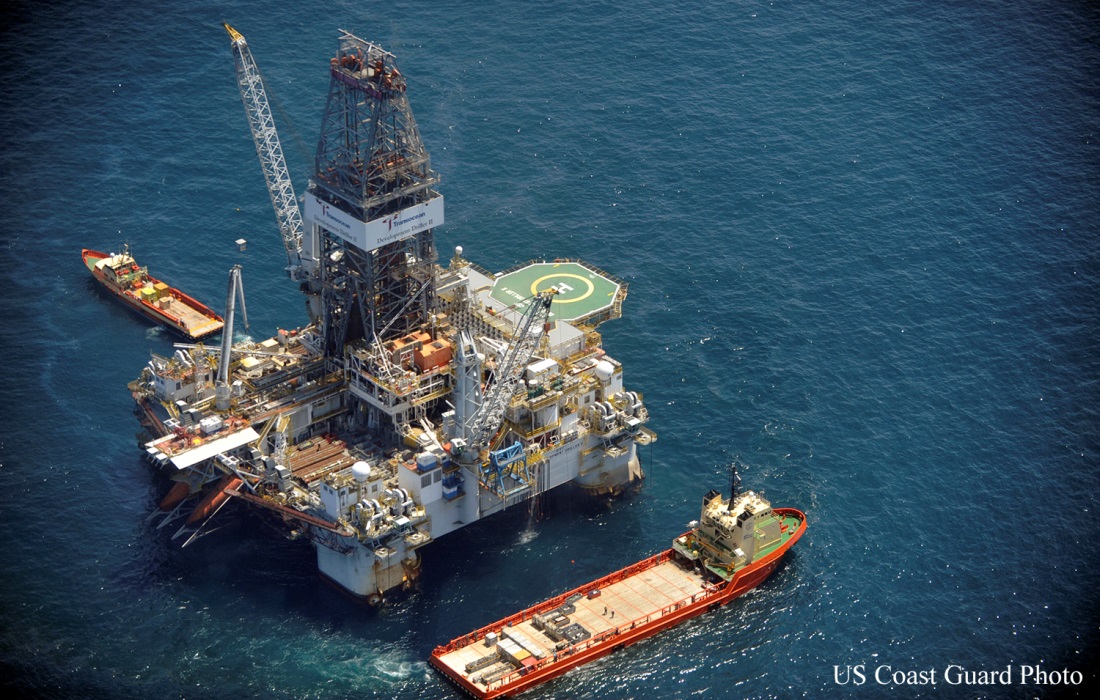 The survey responses predict a decline in asset values based on damage to company reputations, litigation losses, and regulation to curtail “fossil fuel pollution.” A majority of fund managers responding to the survey also anticipate peak demand for oil and gas to impact stock values within the next ten years.

We’ve heard this many times before. In his address to the nation on April 18, 1977, President Jimmy Carter stated, “…we could use up all the proven reserves of oil in the world by the end of the next decade.” But while government pressure and public opinion may drive oil prices lower, there is neither evidence that we are running out of oil nor that market demand for hydrocarbon fuels—coal, gas, and oil—is declining.

Over the last 30 years, world efforts to try to halt human-caused global warming have dominated energy policy in developed countries. In 1988, the United Nations established the Intergovernmental Panel on Climate Change and began a global mission to fight man-made warming. At the Rio de Janeiro Earth Summit of 1992, 41 nations and the European Community signed a treaty pledging to reduce greenhouse gas emissions. By 2016, over 300,000 wind turbines were operating worldwide.

The world invested almost $3 trillion dollars in renewable energy from 2004 to 2017. But according to the International Energy Agency, coal, oil, and natural gas continue to provide 82 percent of world energy needs, exactly the same share as in 1985. 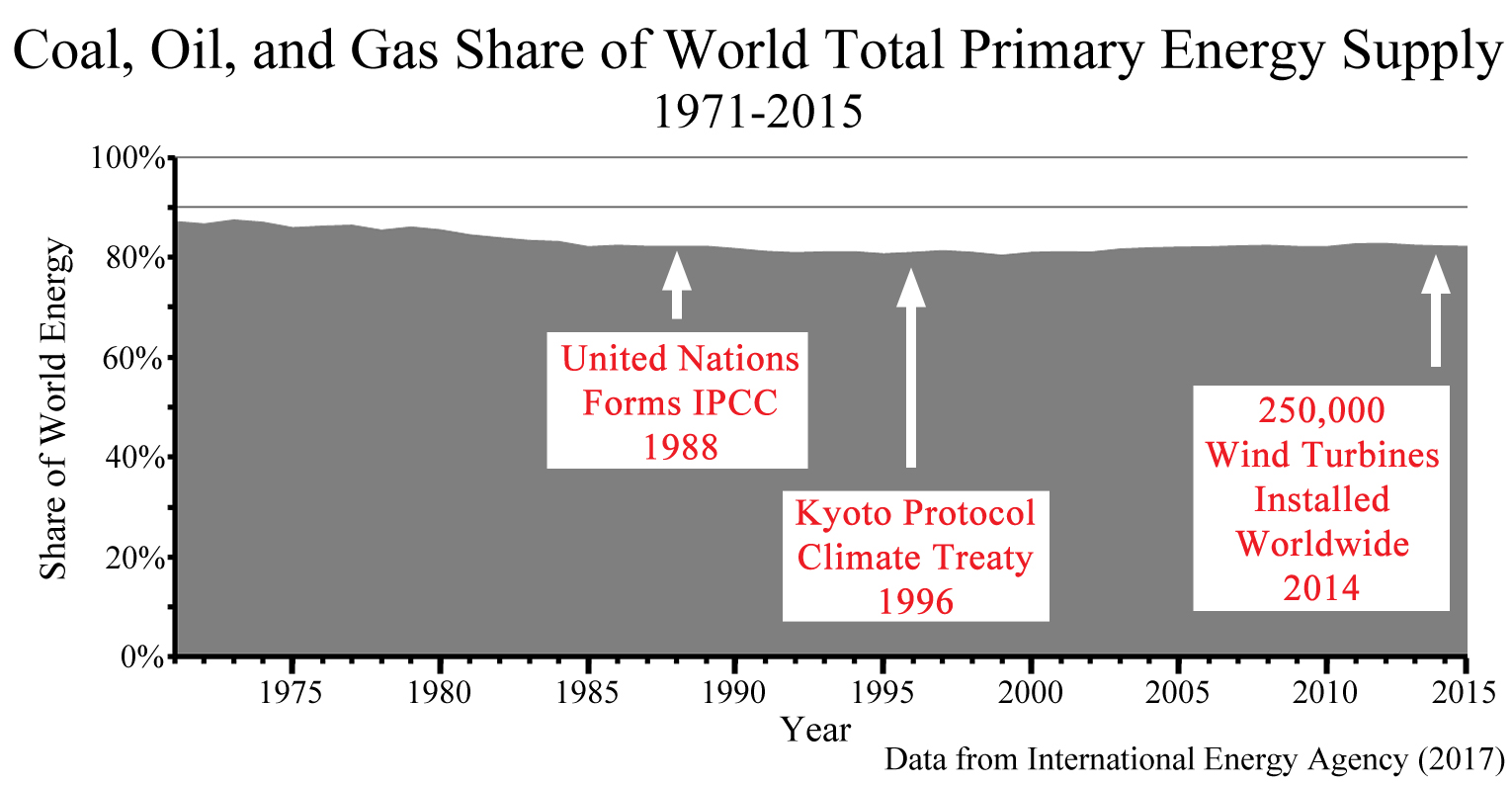 Nor has energy demand entered a decline. Energy consumption more than tripled since 1965. Each day the world uses the energy equivalent of the oil carried in 182 oil tankers, each with a 200,000-ton capacity, or the energy output of 37,000 Hoover Dams.

From 1996 to 2016, world oil consumption rose 31 percent, natural gas use rose 59 percent, and coal consumption climbed 62 percent. Each year, the world adds about a United Kingdom worth of new energy demand, most of it powered by hydrocarbons. Renewables cannot even supply the annual growth in energy demand, let alone replace traditional hydrocarbon fuels.

In addition to the historical growth in hydrocarbon consumption, other trends support the notion that coal, gas, and oil will be with us for many decades to come. Demand for oil, in particular, shows no sign of decline.

Biofuels have fallen far short of the goal of replacing vehicle, plane, and ship fuels from oil. After two decades of subsidies and mandates, biofuels provide about 8.5 percent of US automobile and truck fuel, using 40 percent of the nation’s corn crop. But scientists recently determined that when land use changes are taken into account, biofuel use does not reduce carbon dioxide emissions when compared to gasoline or diesel fuel. Governments and environmental groups alike now question policies promoting large-scale biofuel use.

Instead, electric cars are proposed as the new solution to end oil consumption. Spurred on by governmental incentives and mandates, leading car manufacturers have announced more than 100 planned electric car models.

But electric car demand is disappointing. According to auto research firm JATO Dynamics, electric vehicles totaled only 0.8 percent of the 86 million cars and light commercial vehicles sold worldwide in 2017. Gasoline- and diesel-fueled sport utility vehicles now dominate world car demand, growing to 34 percent of vehicle sales in 2017. SUVs not only dominate the market in North America, but SUV sales are growing in Europe and booming in China.

Constrained world oil prices continue to make gasoline- and diesel-fueled vehicles affordable to operate. The US hydrofracturing revolution plunged petroleum prices from over $100 per barrel in 2014 to under $30 per barrel in 2016. Global demand recently boosted prices to $70 per barrel, but US frackers are again working overtime to boost supply. US crude oil production will exceed 10 billion barrels per day this year, a historic record output, up from 5 billion barrels per day only 10 years ago. With fuel prices constrained by growing supply, look for the global fleet of vehicles to double from one billion today to over two billion by 2050. 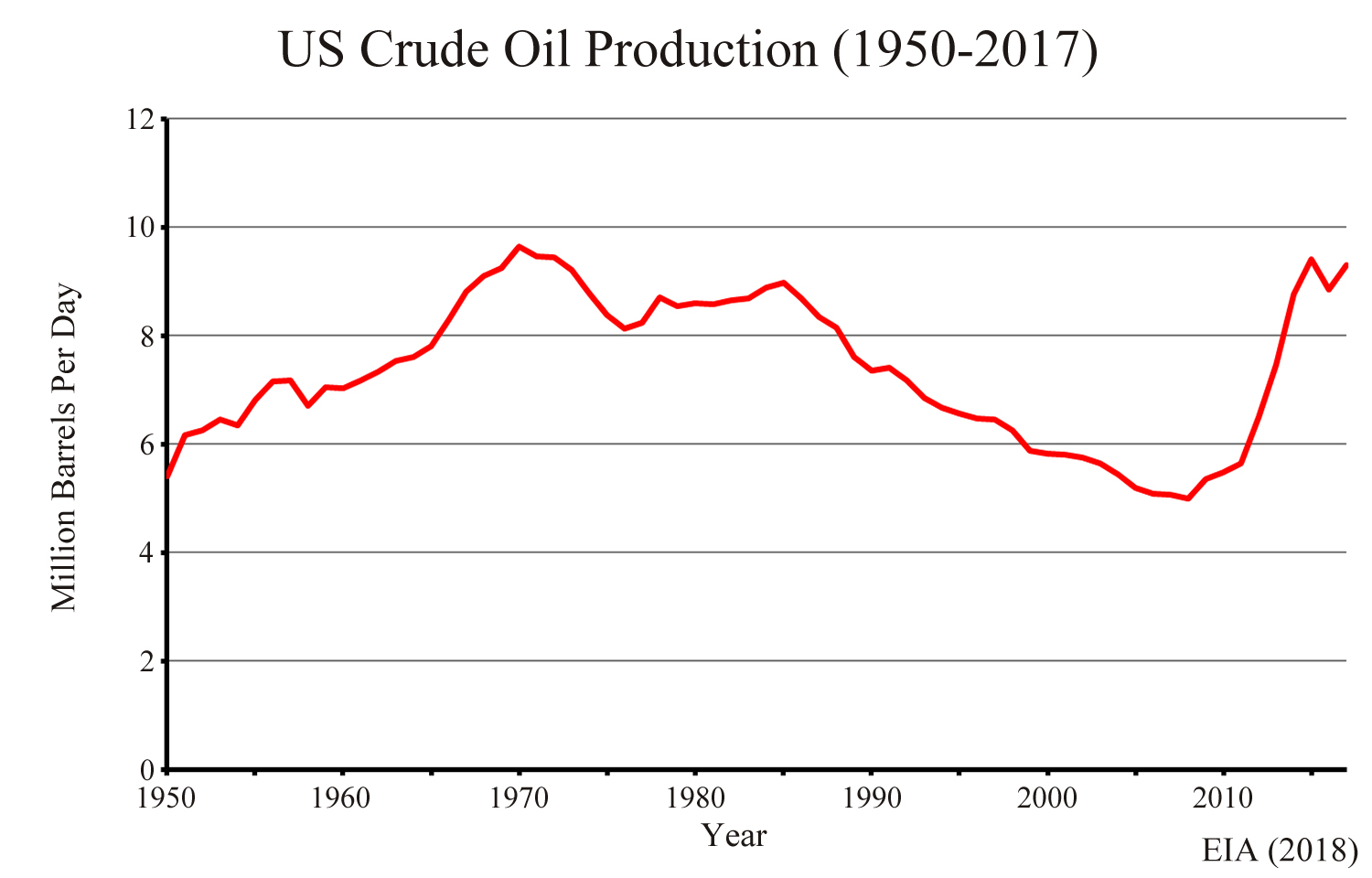 Fund managers trust the theory of human-caused warming, but world markets don’t seem to be buying it. The decline in oil demand and the fall in oil company stock prices remain decades away.

Steve Goreham is a speaker on the environment, business, and public policy and author of the book Outside the Green Box: Rethinking Sustainable Development.

Originally published in the Washington Examiner.

President Jimmy Carter, address to the nation on energy, April 18, 1977, You Tube, https://www.youtube.com/watch?v=-tPePpMxJaA&t=3s