As the world moves towards Zero Emissions and full electrification, certain materials become more than mere commodities as their strategic importance increases: Studies conducted by the European Commission's Joint Research Centre concluded that several low-carbon energy technologies could be at risk because of potential bottlenecks in the supply chains of certain metals. Among these, critical rare earth metals are used in NdFeB permanent magnets and are essential for producing light, compact and high-efficiency traction motors. These ‘supermagnets’ contain neodymium (Nd), praseodymium (Pr) and dysprosium (Dy) rare earths in their composition. 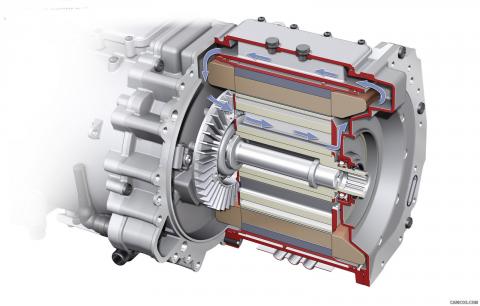 Rare earths refer to 17 chemical elements with atomic numbers 57–71, 21, and 39. Their two subfamilies, one scarcer and hence more valuable than the other, have similar chemistries, so they’re generally found and mined together.

Despite their name, rare earths are not geologically rare but are widely dispersed throughout the Earth’s crust. Unfortunately because they are generally not found in high concentrations their beneficiation is not common. Further raising miners’ costs and risks, the world market for rare earths is modest (several billion dollars a year), volatile, complex, and dominated by China, where not all mines and exports are legal and transparent.

Because of their strategic importance, the fact that most rare earths originate in China is cause for grave concern within the motor industry. Any restrictions on exports, such as those imposed in 2010 and 2011 that drove up prices by between 4 and 9 times in less than a year, would be disastrous for the roll out of EVs.

Although rare earth prices have declined since 2013, concerns regarding supply remain high as the Chinese government introduces various measures to limit REE production, driven by environmental, social and resource concerns.

Underlining the importance of a secure supply of rare earths at stable pricing, a July 2017 article published on ‘Science Direct,’ reports that a permanent magnet synchronous motor (PSM) requires between 1 and 2 kg of NdFeB depending on the power of the motor. If all of the EVs sold worldwide in 2015 (about 550,000 passenger cars) had been produced with NdFeB magnets, up to 1100 tonnes of NdFeB would have been required. This represents just over 1% of the global production of NdFeB magnets, in 2015.

Weighing up all the supply-side risks and elevated material costs it would make sense to replace rare earths with materials or technologies that are easily accessible and less costly.

Freeing the industry from reliance on rare earth metals

Unfortunately, the prospect of a complete and direct replacement of rare earths by other more readily available or less critical materials without decreasing product performance, raising the price or both, is very limited.

NdFeB magnets are capable of generating the strong magnetic fields required by traction motors while optimizing the packaging. By way of example: Several popular alternatives to permanent magnet motors rely on electromagnets, where a magnetic field is generated by passing current through a conducting coil.

By comparison a NdFeB magnet with a cross sectional area of 3 mm2 produces the equivalent magnetic field to that produced by passing 13 A through a coil with 220 turns of copper wire. In terms of space, if a current density of 10 A/mm2 is assumed in the conductor (which is typical of a traction motor), then an equivalent electromagnetic coil would have five times the cross sectional area of the NdFeB magnet.

At the same time, due to the electrical resistance of the conductor, the coil suffers losses of 50 W per metre of wire-winding. To put this in perspective, in a typical 80 kW traction motor NdFeB magnets could reduce the total motor packaging by 20% and conservatively reduce winding losses by 300 W.

At the moment there is no alternative magnet with similar properties to NdFeB, and therefore research focuses mostly on reducing the rare earth content by:

A number of magnetic materials developed prior to NdFeB are being reconsidered; although the relative performance of these materials may be lower, reduced cost and better security of supply could play out in their favor:

The major challenges of ferrite-based motor designs, center around the low remnant flux density and coercivity of the magnets. With only one third of the remnant flux density of NdFeB magnets, ferrite magnets require substantial flux focusing (concentrating the flux from multiple magnets) to optimize torque density, together with a design which also offers reluctance torque.

At the same time, the coercivity of ferrite magnets is about one fifth to one third of NdFeB magnets; as a result very careful design of the motor is necessary to limit demagnetizing fields during field weakening and under short circuit conditions. One advantage, however, is that their coercivity increases with temperature, unlike materials such as NdFeB where performance drops as temperatures increase. This characteristic makes them less sensitive to sudden demagnetisation in demanding applications.

In Europe the Replacement and Original Magnet Engineering Options (ROMEO) consortium has combined the best European academic expertise in permanent magnetism with world-leading magnet manufacturers and European companies eager to develop new materials that exploit the advantages of ferrite magnets.

According to Jean-Marc Dubus, Director of Advanced Projects at Valeo, if Neodymium with an electromagnetic induction of 1,3 Tesla (T) was replaced with ferrite generating 0,45 T, there would be a risk of demagnetization, particularly in cold environments. So to maintain the same power, the motor would need to be 3 times longer and the amount of copper would also need to be increased. And with Dysprosium accounting for half of the price of the magnet, the content would only have been reduced by 3.5% of the total mass.

So, to find an effective replacement researchers at ROMEO studied the magnetic phases of the 20 cheapest materials in the world, recording over 56,000 combinations! Furthermore, the production methods were also modified: a magnet without neodymium, for example, was covered with powdered HREEs to produce a thermal shield that protects against demagnetization.

Initial results show that by reducing dysprosium content by a factor seven and adapting the magnet manufacturing process heavy rare earths can be reduced to 0,5% of the mass of the magnet, without sacrificing performance.

The next step is to go from a few milligrams produced in the laboratory to full scale production that meets the auto industry’s demand. Nevertheless, while the project has reduced the amount of rare earths, the cost of these magnets is not necessarily going to drop, because the modified manufacturing process has become more complex.

Even if material substitution is successful there is still a strong argument supporting the investigation and exploitation of other motor technologies which do not require rare earth materials. Renault and Tesla have already employed wound rotor and induction motor technologies respectively, by so doing eliminating rare earth magnets.

It’s for this reason that several manufacturers are studying alternative machine designs that reduce or eliminate rare earths completely:

These and other technologies, such as switched reluctance motors and those which replace rare earth magnets with low cost ferrites, are likely to form the basis of even higher performance, cost effective traction motors in the future.

And looking to a future where EVs are the predominant technology; would recycling of rare earths not be viable?

While at the moment recycling magnets from small machines is complicated and not economically viable, those stripped from machines that weigh more than a kilo could be interesting. Within the framework of the European Training Network, 15 doctoral students in the DEMETER project are working on recycling by defining the value chain for direct recycling of the magnets or indirect recycling for the oxides.

While the doctoral students are studying direct recycling by blowing hydrogen onto the NdFeB magnet in an enclosed tank to transform it into powder, other groups are looking at redesigning the industrial disassembly process for the magnets.

Thus it’s important that manufacturers and suppliers develop an integrated ‘security-of-supply’ policy to develop various strategies that include secure supply, material substitution, unique motor design and recycling to ensure the uninterrupted roll out of electrified vehicles.