With regions across the globe experiencing drastic and often catastrophic climate related events, the earth appears to be firmly in the grips of global warming. To save the planet world leaders from 195 countries adopted the first-ever universal, legally binding global climate pact in December 2015. The Paris Accord, which came into force on 4 November 2016, sets out a comprehensive action plan to limit global warming to below 2°C, come 2050.

To meet these objectives, Green House Gas (GHG) emissions have to be cut by 85% within the next 33 years. This means reducing CO2 emissions by 2.6% per year on average, or 0.6 Gt per year in absolute terms.

With the transportation sector accounting for fourteen percent of the total global GHG emissions, as reported by the Energy Protection Agency in their August 2016 update of the ‘Global Greenhouse Gas Emissions Data’, the motor industry, in particular, is under pressure to step-up emissions reductions.

So far, thanks to aggressive emissions targets being set by regulators in the major markets, the industry has managed to achieve significant cuts in emissions. 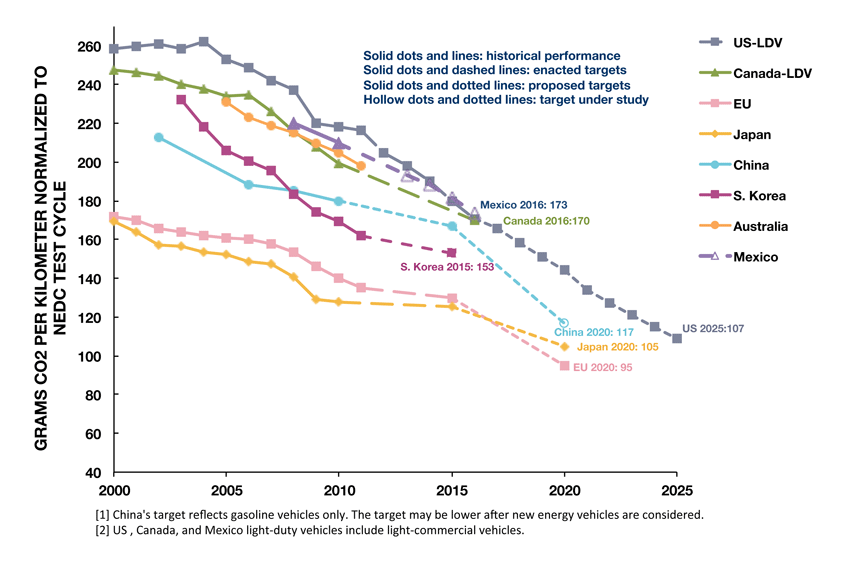 Recognised as leaders in the regulation of GHG emissions, Europe is preparing for the next step in CO2 reduction – not only with the introduction of the new 95g/km targets in 2020/2021, but also in aligning the test procedures to better replicate real world driving conditions.

The EU takes the lead in regulation-driven emissions reduction

When setting emission limits in the EU the mass of the vehicle is taken into account, using a ‘limit value curve.’ The curve is set in such a way that the targets for fleet average emissions accommodate vehicles across all segments. The factor used for passenger cars is 0.0333; meaning that for every 100 kg additional vehicle weight, 3.33 g/km more of CO2 is allowed.

The limit value curve means that heavier cars are allowed higher emissions than lighter cars. However only the fleet average is regulated, so manufacturers are still able to make vehicles with emissions above the curve, as long as these are balanced by vehicles below the curve.

In a clear demonstration of the efficacy of regulation-driven emissions reduction in the region, emissions have dropped by 16% or 22 gram of CO2 per kilometer (g CO2/km) since monitoring began under current legislation in 2010. The average emissions level of a new car sold in 2016 was 118.1 grams; comfortably below the 2015 target of 130 g.

Notwithstanding these impressive achievements manufacturers are faced with an even more demanding challenge in the form of further cuts in 2020/ 2021: By 2021, phased in from 2020, the fleet average to be achieved by all new cars will be 95 g CO2/km. 95% of each manufacturer's new cars will have to comply with the limit value curve in 2020, increasing to 100% in 2021.

As with any effective regulation, the EU prescribes significant penalties for non-conformance: Introduced in 2012, manufacturers are liable for an excess emissions premium for each car registered if the average CO2 emissions of a manufacturer's fleet exceed its limit value in any year.

This premium amounts to:

From 2019, the system is simplified; with manufacturers fined €95 for each gram over the regulated target.

On the positive side, the Union also recognizes the role that innovation plays in driving down emissions, and therefore also rewards manufacturers for innovative technologies.

Although these innovative technologies can help cut emissions, in some cases it is not possible to demonstrate the CO2 reduction of a new technology during the test procedure used for vehicle type approval.

So, not to inhibit eco-innovation manufacturers can be granted emissions credits equivalent to a maximum emissions saving of 7g/km per year for their fleet if they equip vehicles with innovative technologies, based on independently verified data.

Furthermore, manufacturers have been able to claim ‘super credits by producing vehicles with extremely low emissions (below 50g/km).

For each vehicle below the threshold, the following applies:

Super-credits will also apply in the second stage of emission reductions, from 2020 to 2022, with each low-emitting car counted as

For this second step, there will be a cap on the scheme’s contribution to the target of 7.5g/km per manufacturer over the three years.

While the roadmap to a cleaner environment in Europe is quite clear, the American landscape is troubled by political uncertainty. The Trump administration has given notice to withdraw from the Paris Accord, while at the same time placing the country’s emissions targets under review.

In 1981 new emission standards, retroactively known as “Tier 0,” were announced to be rolled out in 1987. The Clean Air Act Amendments (CAAA) of 1990 subsequently defined two updated tiers of standards for light-duty vehicles:

New Tier 3 emission standards for light-duty vehicles were proposed in March 2013 and signed into law on March 3, 2014. The Tier 3 standards - closely aligned with California LEV III standards, will be phased-in from 2017 through 2025.

The structure of Tier 3 standards is similar to the Tier 2 standards, whereby manufacturers must certify vehicles to one of seven available “certification bins” and must meet fleet-average emission standards for their vehicle fleet in a given model year. The standards are more stringent than Tier 2 standards and include a number of other important changes:

• The bins are named using their corresponding NMOG+NOx limit in mg/mi. The highest emission bin, Bin 160 (NMOG+NOx = 160 mg/mi), is equivalent to Tier 2 Bin 5

Fuel economy standards (CAFE standards), on the other hand, are developed by the National Highway Traffic Safety Administration (NHTSA), an agency within the US Department of Transportation (DOT).

The CAFE achieved by a given fleet of vehicles in a given model year is the production-weighted harmonic mean fuel economy, expressed in miles per US gallon (mpg), of a manufacturer's fleet of current model year passenger cars or light trucks with a gross vehicle weight rating (GVWR) of 8,500 pounds (3,856 kg) or less (but also including medium-duty passenger vehicles, such as large sport-utility vehicles and passenger vans, with GVWR up to 10,000 pounds), produced for sale in the United States.

On July 29, 2011, President Obama announced an agreement with thirteen large automakers to increase fuel economy to 54.5 miles per gallon for cars and light-duty trucks by model year 2025. He was joined by Ford, GM, Chrysler, BMW, Honda, Hyundai, Jaguar/Land Rover, Kia, Mazda, Mitsubishi, Nissan, Toyota, and Volvo, which together account for over 90% of all vehicles sold in the United States, as well as the United Auto Workers (UAW), and the State of California, who were all participants in the deal. New CAFE regulations for model year 2017-2025 vehicles were finalized on August 28, 2012.

However as a check and balance, the 2011 agreement called for a mid-term review to look at how the industry was progressing with the new standards. On July 18, 2016, the EPA, NHTSA and the California Air Resources Board (CARB) released a technical paper assessing whether or not the auto industry will be able to reach the 2022 to 2025 mpg standards. The Draft Technical Assessment Report, as the paper is called, is the first step in the mid-term evaluation process.

The government groups found that the auto industry has done well in innovating and pushing towards lowering greenhouse gas emissions. The paper says the technology is cheaper or about what was expected in terms of cost, and that automakers are adopting new technologies quicker than expected.

Still, the paper says that the 54.5 mpg goal is unrealistic. That goal was based off a market that was 67 percent cars and 33 percent trucks and SUVs. American customers aren't buying that many cars—the market is still about 50/50 and will likely stay that way. The paper says more realistic goals are 50 mpg to 52.6.

Highlighting the impact of this shift in the market, light vehicles from the 2016 model year will be the first to fall short of federal fuel economy targets in more than a decade, according to a new projection by regulators.

In a two-page report, dated 14 February 2017, the National Highway Traffic Safety Administration (NHTSA) predicts that 2016 models will average 32.1 miles per gallon, exceeding the target of 32.8. The agency forecasts another shortfall in the model year 2017 of 31.8 miles per gallon compared to a projected target of 33.

Although carmakers can use credits earned by selling vehicles that over-comply, this is getting tougher amid surging truck and SUV sales. US passenger-car sales fell 13% during the first two months of 2017, while light-truck sales rose 6.5%, according to the Automotive News Data Center.

And the news doesn’t get any better for OEMs: Three environmental groups in the U.S. filed a lawsuit against the federal government in September 2017 for delaying the rollout of higher “gas-guzzler” penalties for automakers producing new vehicles that fail to meet minimum fuel-economy standards.

Congress in 2015 ordered federal agencies to adjust the penalties to account for inflation and, in response, NHTSA proposed to raise fines to $14 from $5.50 for every 0.1 mile per gallon that vehicles are over the Corporate Average Fuel Economy. So, under the current decreasing fleet averages, it would seem as if the industry is set to contribute sizeable portions of their revenue to regulators - unless the regulations are rolled back.

Meanwhile in China, possibly the country with the highest levels of air pollution, regulators are also pushing for tighter emissions regulations.

China’s new emissions regulations catches up with other markets

On December 23, 2016, the Ministry of Environmental Protection (MEP) of the People’s Republic of China released the final rule of the Stage 6 Limits and Measurement Methods for Emissions from Light-Duty Vehicles, known as the China 6 standard.

This standard applies to light-duty vehicles (M1, M2, and N1 categories up to 3,500 kg of maximum mass per the European regulatory classification) powered primarily by gasoline or diesel, and will take effect on July 1, 2020.

Unlike the previous standard phases, which closely follow the European emission standards (Currently China 4 and 5 are roughly equivalent to Euro 4/5), the China 6 standard combines best practices from both European and U.S. regulatory requirements in addition to creating its own.

While the three largest markets in the world are obviously crucial to achieving emissions reductions, other major markets are also introducing new emissions targets:

With sustainability of the environment at stake this is definitely worth striving for!