A perfect storm: Law in an age of advances in external lighting and autonomous driving

The automotive industry is possibly at its most exciting and revolutionary crossroads in its storied history. Autonomous driving is not only possibility but will soon be mainstream reality. The implications for car design and engineering are already immense with external lighting an integral part of that (r)evolution. That we know. Far less clear is where the law, usually slow to react in technological matters, stands on these innovations in automotive development, particularly with regard to autonomously driven vehicles. That is the perfect storm: hugely exciting technological advances in the way cars are externally lit and even driven on the one front, and on the other sluggish legislation that could complicate or even hinder progress.

The Global and China Automotive Lighting Market Report of 2015 forecast that the automotive lighting industry was set to grow by 10.8% to $28 billion in 2015 and reach $30.1 billion by 2016, a year-on-year rise of 7.5%. The Report deduced that this substantial growth was due to two factors: Firstly, there is the continued penetration of LED in automotive lighting, with the price of LED chips continuing to fall, resulting in ever more automakers adopting LED to make headlamps. It is predicted that LED headlamps will comprise 21% of the headlamp market by 2020. The second reason for this robust growth in the automotive lighting market is the marked increase in the use of ADB (adaptive driving beam) /AFS (adaptive front-lighting system) for external lighting. Laser headlamps and OLED tail-lamps have also spurred growth. The penetration of laser headlamps, even though very expensive at this time, is still expected to reach 15% market share by 2025, according to the 2015 Report. 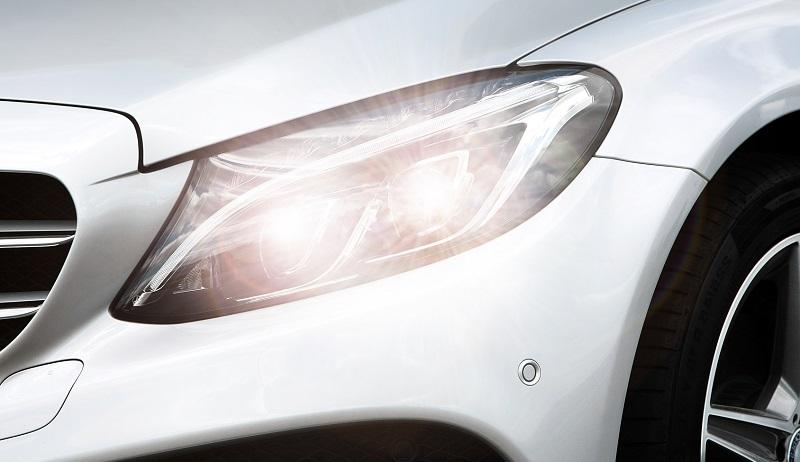 The front adaptive lighting market was forecast to be the largest and fastest-growing single segment in the automotive lighting industry. This growth was attributed primarily to stringent safety regulations in Europe and the increased adoption of adaptive lighting features in premium cars in the Asia-Oceania region. And the technology clearly has so much more to offer. Mark Halper discusses how smart LED lighting has today advanced to “something equivalent to voice and text - but its heyday as part of a robust information upload and download habitat has yet to come.” Jan Denneman, president of LightingEurope, is cited by Halper, stating that, “[Smart LED] requires a paradigm shift in our thinking, in the manufacturers' thinking, in the regulators' thinking, and even probably in the thinking of our customers".

Even with all its exciting projected growth, the industry for external automotive lighting does have its gremlins. ReportsnReports cautioned how the two major factors hindering the growth of this market are the continued high cost of R&D and the fluctuating prices of key raw materials. Consumer confusion regarding LED lights and other ‘cutting edge’ external lighting is also a concern. Chris Nelson discusses this in the context of American consumers and how there is often confusion regarding whether headlamps, for example, need to be “DOT [Department of Transport] Approved”. Education seems to be of paramount importance. What seems obvious to industry insiders may be daunting or even anathema to the average layperson simply wanting to upgrade their car’s external lighting features.

A further concern regarding external automotive lighting is that of discrepancies in laws between countries. For example, Dan Carney wrote in the highly influential Popular Mechanics that United States law does not allow for a slew of innovative lighting initiatives that the European Union does. One such example is that pertaining to high beam control that greatly shields one’s headlight beam to the eyes of an oncoming driver. American federal law forbids this, however, on the basis that only one kind of low beam is permitted, i.e. the kind that dims all of the high beam elements on both sides of the car. Also, the EU allows for brake lights that flash quickly in response to hard brake pressure. The idea is to warn following drivers of a sudden stop from a vehicle ahead. But U.S. only allows brake lights to glow more brightly than taillights - flashing lights are forbidden.

As stated above, stringent European Union safety-focused law has done much to boost the innovation of external automotive lighting – and the acceptance thereof. Europe has been at the forefront of safety-backed initiatives regarding external automotive lighting. Allianz Australia cites how EU law regarding usage of daytime lights had improved road safety. However, it has in fact been environmental directives that have most spurred this innovation in external automotive lighting.  Law (EC) No. 443/2009 of the European Parliament set limits within the EU for the average value of CO2 emissions by vehicle fleets. The EU demands that emissions be down to 95 g CO2/km in 2020, with sanctions applied to each gram over this limit. Starting in 2019, the fine will be increased to €95 as from the first gram over the limit. As part of this legislative drive, the EU devised an initiative known as “Eco-Innovations” in which a specific category of technologies that provide a confirmed contribution in terms of reducing CO2 emissions result in credits for manufacturers, as certified by third-party bodies and verified by the actual road use of the vehicle.

External lighting plays its role in this initiative, according to the European Commission. An excellent example of this is Magneti Marelli Automotive Lighting’s “E-Light” LED low-beam module which uses about a sixth of the energy of a traditional halogen light bulb. Carmakers that fit the E-Light account for a bonus of 1g of CO2/km per vehicle, which allows for considerable fuel consumption and emission savings. This headlamp was approved by the EU as part of its “Eco-Innovations” program. And so that credit will be passed onto those carmakers which fit the E-Lights onto their vehicles. As Eugenio Razelli, C.E.O. of Magneti Marelli, commented: “LED benefits the carmakers by allowing them to potentially save on CO2 levels emitted by their fleet, and it is also interesting in terms of the final customer, specifically from the standpoint of safety, reliability and reduced consumption, as well as design. LED technology is revolutionizing the world of lighting…”.

The Elephant in the Room: Autonomous Driving

Chris Giarratana offers this sobering thought: “Only 16 years ago, many industry experts thought autonomous cars would not appear in our lifetimes.” But they are clearly here and that has left legislators worldwide scrambling for legislation. Particularly worrisome is the United States, given that its regulatory framework regarding road transport is so fragmented. Steve Brachmann writes how, “Self-driving cars are in such a nascent stage that, combined with America’s complex regulatory atmosphere, there is likely to be a lot of confusion over the rights and liabilities involved with the use of these technologies.” This contradictory tendency between states is already evident with regard to autonomous vehicles. Giarratana cites how New Jersey wants to require a special driver’s license for people who want to operate fully autonomous cars, whilst Florida does not demand that at this time.

The EU has passed no definitive directives on autonomous driving and cars to date, even though there have been some tentative but non-binding efforts by individual member states such as Germany, for example. In the U.S, product liability and tortious contract law can be a hindrance to autonomous vehicles, as raised by a 2014 research paper by The Brookings Institution. Policy guidelines were released by the U.S. Department of Transportation’s National Highway Traffic Safety Administration (NHTSA) in May 2013 designed to address the types of automation with the potential to reduce highway fatalities as well as the safe operation of new automated driving technologies for testing. The NHTSA is decidedly buoyant about the potential of autonomous vehicles, backed by its own study proving that motor vehicle crashes in 2010 cost $242 billion in economic activity, including $57.6 billion in lost workplace productivity, and $594 billion due to loss of life and decreased quality of life due to injuries. The NHTSA released a new federal guidance for Automated Driving Systems (ADS) entitled A Vision for Safety 2.0., which it released on September 12th, 2017. The document calls for industry, state and local governments, safety and mobility advocates and the public to ensure the development of automated vehicles and technologies. Even the NHTSA cautions about fragmentation due to conflicting state laws, however.

International law is not exactly helpful either in providing a congruent international framework for autonomous vehicles. Kate Connolly points out how the 1968 Vienna Convention on Road Traffic, to which over 70 are signatories, stipulates that a human must always be at the control of a vehicle. However, Joseph White in The Wall Street Journal provides an interesting reason of why there will nevertheless be an impetus for autonomous vehicles with this stark conclusion: “Auto makers – and safety regulators in the U.S. and Europe – say they’re serious about pushing more autonomous braking and steering systems into cars and trucks for one overriding reason: Most humans are depressingly bad drivers.”

Dr Rainer Neumann of the International Automotive Lighting and Light Signalling Expert Group has advocated for the international harmonization of legislation regarding all light sources (Halogen, Xenon, LED) and all light applications (standard dipped/main beam, AFS, LED-array generated, etc.) for motor vehicles.  This would certainly be very helpful with regard to fostering innovation in external automotive lighting. That innovation would eventually ensure greater road safety, driver and passenger safety and the overall improvement of driving conditions for all. Ultimately, even more beneficial would be greater harmonization in laws regarding autonomous vehicles and driving. That does not seem unreasonable when one considers that 94% of road accidents are due to human error. Lighting the way as safely as possible as we drive (or not) does indeed appear to be the future.