Will self-driving trucks herald in a new social order?

For millions of workers around the world, the reasonable expectations of their youth - a steady job, home ownership, and education for their children - have degraded into decades of stagnation, even as the news of growth and prosperity of the economy is flashed across TV screens every evening.

The driving force behind both trends has been technology: It is widely recognized among economists that while the impact of globalization has been significant, robots and automation have been a far more powerful force.

Over the past few years several studies have warned of a bleak future racked by technology-induced job cuts. For example, a pivotal 2013 study by researchers at the University of Oxford found that of 702 unique job types in the United States, about 47% were threatened by automation. This was backed up by similar findings in Australia suggesting 44% of occupations, representing more than five million jobs, were at risk over the coming 10 to 15 years.

The few good working class jobs that remain are those that, at least so far, have escaped the forces of both globalization and automation: Jobs such as long-distance truck driving. 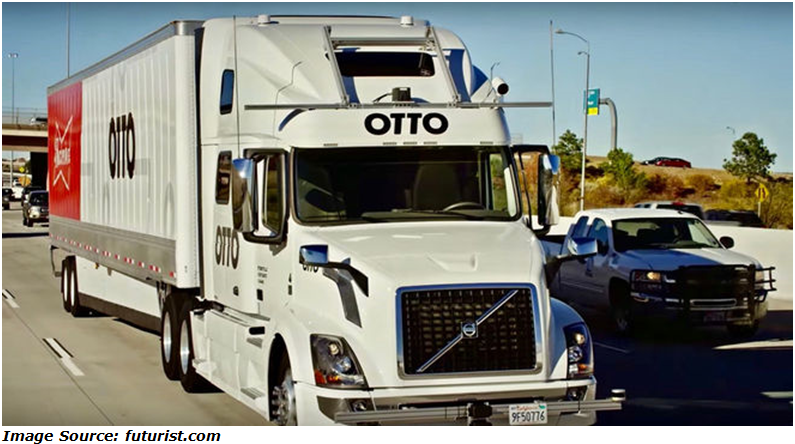 Truck driving is arguably one of the last jobs where diligent effort exerted in a blue-collar profession is respected, essential, and fairly well compensated

Will the automated truck put an end to trucking as a profession?

But it would appear that the trucking vocation is entering its twilight years: In October 2016, a tractor trailer full of beer drove itself down Colorado's I-25 with nobody behind the wheel. Uber Technologies Inc. and Anheuser-Busch teamed up to make the first commercial shipment by an automated truck.

With a police cruiser in tow, the 18-wheeler drove more than 120 miles without a “driver” at the wheel, to make a delivery of Budweiser beer. The delivery was proof that Otto, the self-driving vehicle group that Uber acquired in July, could successfully put an autonomous truck into the wild.

The technology enables complete autonomy on highways: trucks can navigate, stay in their lane, and slow or stop in response to traffic conditions without human intervention. Otto’s equipment currently costs about $30,000, but that is certain to fall significantly as technology and economies of scale come into play.

And as the technology rolls out, the incentive to adopt it will be powerful: in the US alone, large trucks are involved in about 350,000 crashes a year, resulting in nearly 4,000 fatalities. Virtually all of these incidents can be traced to human error. The potential savings in lives, property damage and exposure to liability will eventually become irresistible.

There’s only one problem: Truck driving is one of the most common occupations in the US.

In December 2016 the White House released a report predicting that 1.3 million to 1.7 million heavy and tractor-trailer truck-driving jobs could be lost to automation. That’s 80 to 100 percent of all truck-driving jobs; although no timeframe was specified.

And in June a study released by the International Transport Forum, forecast that automated trucks would cut the 6.4 million long-haul truck driving jobs by up to 70 percent by 2030.

Although in the foreseeable future automated trucks are likely to be limited to long-haul highway operations, only requiring human intervention at both ends of the journey, even this will have a significant impact on the workforce, leaving governments across the world asking the question: Once replaced by automation, where will truckers find work?

What’s the future hold for truckers?

As a result of automation, new jobs will emerge, but they will essentially be in a different field - technology. Autonomous trucks use sensors and mapping, they brake autonomously and use radar and cameras to navigate around other vehicles - so, while automated trucks will still need people, at least at first, the jobs will be reserved for people who can handle these vehicles’ on-board computers and fix problems that arise. It will be less focused on physically driving the truck, and more on monitoring the systems.

So, while there will still be jobs it’s easy to imagine that the nature of “truck driving” might be radically transformed. Piloting an automated truck would have evolved into a “technology” job.

Consequently piloting trucks for those final few miles might eventually develop into a white-collar profession actively sought after by college graduates. This might be especially true in the wake of the onslaught of software automation in many other traditional white-collar, knowledge-based occupations (financial analysts, lawyers, computer programmers – any job that involves manipulating information in a predictable way).

The upshot could be that truck driving, like many other occupations before it, will eventually be subject to “credential inflation” and thus could become far less accessible to the roughly two-thirds of Americans who don’t have a college degree.

Such sudden shocks have happened in the past. The industrial revolution of 1750 -1850 saw the invention and widespread adoption of the steam engine, spinning wheels, cement, chemicals and many other technologies. These discoveries improved the productivity of industry and ultimately created skilled employment.

But while we’re likely to see similarities and parallels to what happened in the industrial revolution, today’s world is a different place.

We know more about how to adapt. It’s becoming increasingly clear that the key to surviving digital technology disruption is finding ways to combine skills with the power of advanced robots and computers.

This is what Andrew McAfee and Erik Brynjolfsson call learning to race with the machine not against the machine in their book ‘The Second Machine Age.’

Spreadsheets didn’t kill off accounting jobs. On the contrary, smart accountants learned how to use spreadsheets to become more productive and more employable.

And Russian trucking company Traft is making sure that it’s ready to take full advantage of the automated revolution, unveiling a transformative strategy it hopes will reinvent logistics for the age of autonomous vehicles and on-demand services.

Preparing the trucking industry for the coming of the driverless truck

With Russian commercial vehicle OEMs such as Kamaz, who has been working with Moscow-based software company Cognitive Technologies to develop an autonomous vehicle platform, pushing to bring the technology to market, Traft built the country’s first specialized testing “polygon.” The polygon includes obstacles that allow the company to test self-driving vehicles in traffic conditions, difficult terrain, unloading at a warehouse or refueling.

But as it went through the evaluation process, Traft started to receive letters from its drivers. Many were worried about their job security, which led the company to create what it claims to be the first trade union in the world for drivers of unmanned vehicles. From the company’s perspective, its drivers need to be willing partners to successfully make the leap to fully-autonomous vehicles.

After deciding to replace 20% of its fleet with vehicles that have autonomous capabilities this year, growing to 40% in 2018, Traft management decided to assist employees setup a government-approved union to oversee extensive re-training programs and safeguard their rights.

Traft says that although the process will be evolutionary, starting with the semi-autonomous vehicles it will roll out some time later this year, it will still impact the role of the drivers, who will need new training.

According to Ivan Pachko, a spokesperson for Traft, the lack of continuing education to match the evolving industry needs to be corrected.

“We at Traft see a real threat if the personnel issue lags far behind the legislative and technological development of unmanned vehicles,” he said. “The most common profession in Russia is a truck driver. Therefore, the protection of their rights is truly a matter of interest for a significant part of our society.”

First and foremost, the company hopes the union will create a structure that will allow it to communicate more transparently about the changes that are happening and why. The union will also help organize and run a series of training centres across Russia.

The centres will teach new technology accessible in the truck cabin; new responsibilities a driver might have on the route when they’re not driving; and how to monitor and analyse the data that will be generated. The company also plans to offer webinars for truckers who don’t live near a centre, and audio seminars they can listen to on the road.

The union will also be a group that can advocate for the salaries and new pay structures needed to match new driver responsibilities.

Resolving that question may ultimately require a fundamental shift in our basic values. One viable solution is some form of direct income supplementation, perhaps in the form of a guaranteed minimum income or universal basic income.

This is an idea that is beginning to gain some traction. Currently, a few experiments are under way in Finland and the Netherlands; soon to be joined by a privately funded trial in the San Francisco bay area. And this spring, the Canadian province of Ontario will launch a trial run of a universal basic income, at a cost of C$25m.

So while the industry forges ahead with automated technology, governments around the world need to rethink socio-political systems to cope with the disruptive fallout of the implementation.