It’s not just the increasing use of smart devices driving the development of the next generation of wireless technology; 5G is also needed to support a wide range of Machine to Machine (M2M) and Internet of Things (IoT) applications. Amongst these are services and applications that will support connected vehicles. Industry interest in V2V (vehicle to vehicle) and V2I (vehicle to infrastructure) connectivity is largely being driven by the key role it will play in enabling driverless vehicles. This increased connectivity will see the amount of data being created and subsequently sent to the cloud increasing exponentially as new devices, including cars, find innovative ways to leverage the IoT.

However, while storage and computing power is increasing according to Moore’s law, meaning they double about every 18 months, bandwidth is increasing at a far slower pace, thereby curtailing the ultrafast data transfer speeds needed for connectivity. Some estimates place bandwidth progression at less than 40% per year; implying that there will be more data being sent to the cloud than there will be bandwidth.

According to Brian Krzanich, Intel’s CEO, data is the new currency of the automotive world: Cameras generate 20-60 MB/s, radar upwards of 10 kB/s, sonar 10-100 kB/s, GPS will run at 50 kB/s, and LIDAR will range between 10-70 MB/s. Crunch those numbers, and each autonomous vehicle will be generating approximately 4,000 GB, or 4 terabytes, of data a day.

In America alone, there are currently 263 million registered passenger cars, meaning that if automated vehicles capture a conservative 10 percent of the American market, at 4 terabytes of daily data, 38.4 zettabytes of data would be generated annually.

In this scenario 5G is deemed to be a key enabling technology to accommodate Big Data, enhance the user experience and transform the transportation system as a whole.

While today’s networks will still handle many applications, 5G will be a key enabler for connected cars and autonomous vehicles as they will be able to almost instantaneously communicate with each other, buildings, and infrastructure. 5G will also enable digital services from within the car, thereby enhancing the passenger experience, and increasing mobility revenue potential. 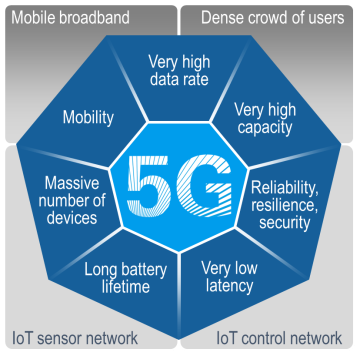 5G is a quantum leap forward when it comes to handling Big Data with the ultra-low latency required for connected automated driving.

For instance: With a car, travelling at 60 MPH, covering a third of a football field every second, the safety of human lives and property comes down to computations being made in microseconds - 5G promises sub 10-millisecond latency for mission-critical apps, compared to the 50 to 100 millisecond latency for existing LTE broadband.

In the words of Colby Synesael, Managing Director and Senior Research Analyst at Cowen & Co.:  “That’s the difference between a car stopping on a dime or being involved in an accident.”

But, while 5G significantly improves bandwidth and latency it is also an enabler for other technologies, such as ‘Fog Computing,’ that can further reduce the load placed on computational power.

5G moves data to the edge in ‘fog computing’

Centralized computing in the cloud has provided several benefits for enterprises relying on the IoT - including scalability, easy pricing schemes and minimal upfront cost. However, today, as many enterprises and large organizations begin to rely on the IoT, the need for large amounts of data to be accessed more quickly, and locally, is increasing. This is where the concept of “Fog Computing” comes into play.

Fog computing, or “fogging”, is a distributed infrastructure in which certain application processes or services are managed at the edge of the network by a smart device, while others are still managed in the cloud. It is, essentially, a middle layer between the cloud and the hardware to enable more efficient data processing, analysis and storage, which is achieved by reducing the amount of data which needs to be transported to the cloud, also greatly decreasing latency and security risks.

Thus for autonomous driving, where cellular networks connect vehicles to other vehicles, pedestrians, smart infrastructure, and an array of cloud-based services, it’s fine to access a cloud-based music-on-demand account or maintain operational and maintenance logs, but the cloud is not necessarily the best place for mission critical decision making that could help a vehicle avoid a collision on the highway. Given the latency demands, this type of processing is best handled at the network edge.

In an example of this approach, Cisco and Microsoft have integrated the former’s Fog Data Services with the latter’s Azure IoT cloud platform. The amalgamation joins edge analytics, security, control and data management with existing centralized connectivity, security, analytics, and app development.

In a recent blog post, Cisco Head of IoT Strategy Macario Namie noted, “One of the beautiful outputs of connecting ‘things’ is unlocking access to real-time data. Next is turning that data into information and, more importantly actions. In trying to do so, companies are finding themselves deluged with data. So much so, that demand for vast compute and storage needs have arisen, which is challenging for many use cases such as mission-critical services: As a result, many IoT initiatives are now distributing this computing power across the edge network, data centers, and public cloud.”

In another development, American telecommunications company, AT&T, is employing its wide-ranging network to facilitate edge computing (EC) thereby speeding up data processing. In this case EC will be powered by a software-defined network, relying heavily on the single-digit millisecond latency that 5G delivers.

The faster speeds and lower latency of 5G are key elements in edge computing. But latency is also determined by the physical distance between a mobile device and its network resources.

To run a VR experience in the cloud where the data center powering the experience is hundreds of miles away will result in a delay, however small. This lag is unavoidable because of the time it takes the data to cross large physical distances.

In AT&T’s model, instead of sending commands hundreds of miles to a handful of data centers scattered around the country, they will send them to the tens of thousands of central offices, macro towers, and small cells usually never farther than a few miles from the customers.

AT&T will also embed these systems in everyday items like traffic lights and other infrastructure. That could enable self-driving cars to talk to their surroundings or alert fire and medical services almost instantly when there’s a problem.

To streamline the adoption of Fog Computing, the OpenFog Consortium released a reference architecture in February 2017 meant to enable end-to-end IoT deployments to drive interoperability in connecting the edge and the cloud.

Helder Antunes, OpenFog Consortium chairman and senior director of the corporate strategic innovation group at Cisco, said the release will drive IoT adoption by providing a universal framework. While fog computing is starting to be rolled out in smart cities, connected cars, drones and more, it needs a common, interoperable platform to turbocharge the tremendous opportunity in digital transformation.

However to take full advantage of this transformation and guarantee low latency and comprehensive coverage, connected vehicles will probably require a global, hybrid network that leverages both satellite and terrestrial technologies to safely connect cars everywhere.

Earlier this year the European Space Agency (ESA), together with companies from the aviation and aerospace industries, launched an initiative called Satellite for 5G, in order to probe and promote the potential of satellite technology within the framework of 5G.

Thanks to satellite’s unique network extension capability and architecture, safety and operational requirements of the connected vehicle can be met efficiently and securely.

But while everyone awaits the roll out of 5G as the standard wireless network, it’s important that the issue of security, which is looming large, be addressed. Enormous amounts of information will be sent over the 5G network and that data must be secured and protected both in transit and at its destination.

What characterizes 5G, even more than 4G, is that it will have a crucial role in the everyday life across the globe. The full scope of security, privacy and resilience will be a concern that extends far beyond technology. It will ultimately impact legal frameworks, regulation and actions by commercial entities and individuals. There will be increased regulatory involvement in how entire 5G systems will operate.

Furthermore, with the onset of 5G the number of devices to be authenticated will be an order of magnitude larger than at present, and they will need to have a long lifespan (meaning security may not be easily upgraded), and they may also be built-in i.e. without human access (cars, meters, sensors). The consequences are that it will be impractical to physically swap identity or security modules.

To ensure a safe operating environment security should be designed in from the outset, rather than “added-on”. Furthermore, security-by-default will be crucial for 5G, given the depth and diversity of security challenges, and to remain relevant it must also support evolution, such as protocol changes and algorithm choice.

While a certain level of security exists in current networks, and will continue to be a driver for 5G networks as a high data-rate, mobile broadband service, additional key driving factors will increase risk and complexity.

First of all, 5G networks will be designed to serve not only new functions for people and society, but also to connect industries such as manufacturing and processing, intelligent transport, smart grids and e-health.

Moreover 5G will be the catalyst for new models of network and communication services. For example, OEMs may wish to provide management services for cars - establishing direct roaming agreements with various access network providers could be a cost-efficient way to achieve this.

Similarly, the concept of terminal/ device will change: unattended machines and sensors will connect; sometimes entire capillary networks comprising tens or hundreds of individual devices will simultaneously attach to the 5G network.

Because of the mission-critical role of 5G networks in global connectivity the 3rd Generation Partnership Project (3GPP) will meet in December 2017 to resolve phase 1 issues and provide solutions for Technical Report 33.899 and the subsequent Technical Specification.

Despite several (currently) unresolved challenges, such as security, once 5G rolls out it will quickly form the foundation of a data-driven market which relies on sensors everywhere; as today’s trends, like smart cities, automated vehicles, and IoT-based businesses continue to grow, more sensors will come to be embedded in devices and infrastructure, which will in turn demand greater data services that only 5G will be capable of offering.